Next Friday I'll be putting on my Sassquatch suit for a very special night out.

Joburg's (absolute) finest, The Brother Moves On, are making a trip down to Cape Town. In turn, The Mother City's (scientifically-proven) greatest band, Bateleur have invited TBMO to team up with them in ripping apart the the fabric of reality at Manilla Bar next Friday. Supporting these guitar-wielding titans, a lovely sellection of support acts have been assembled in the form of Cutting Gems, Seferino, Haus DJs and your friendly neighborhood Sassquatch. Needless to say, this is going to be sheer magic. 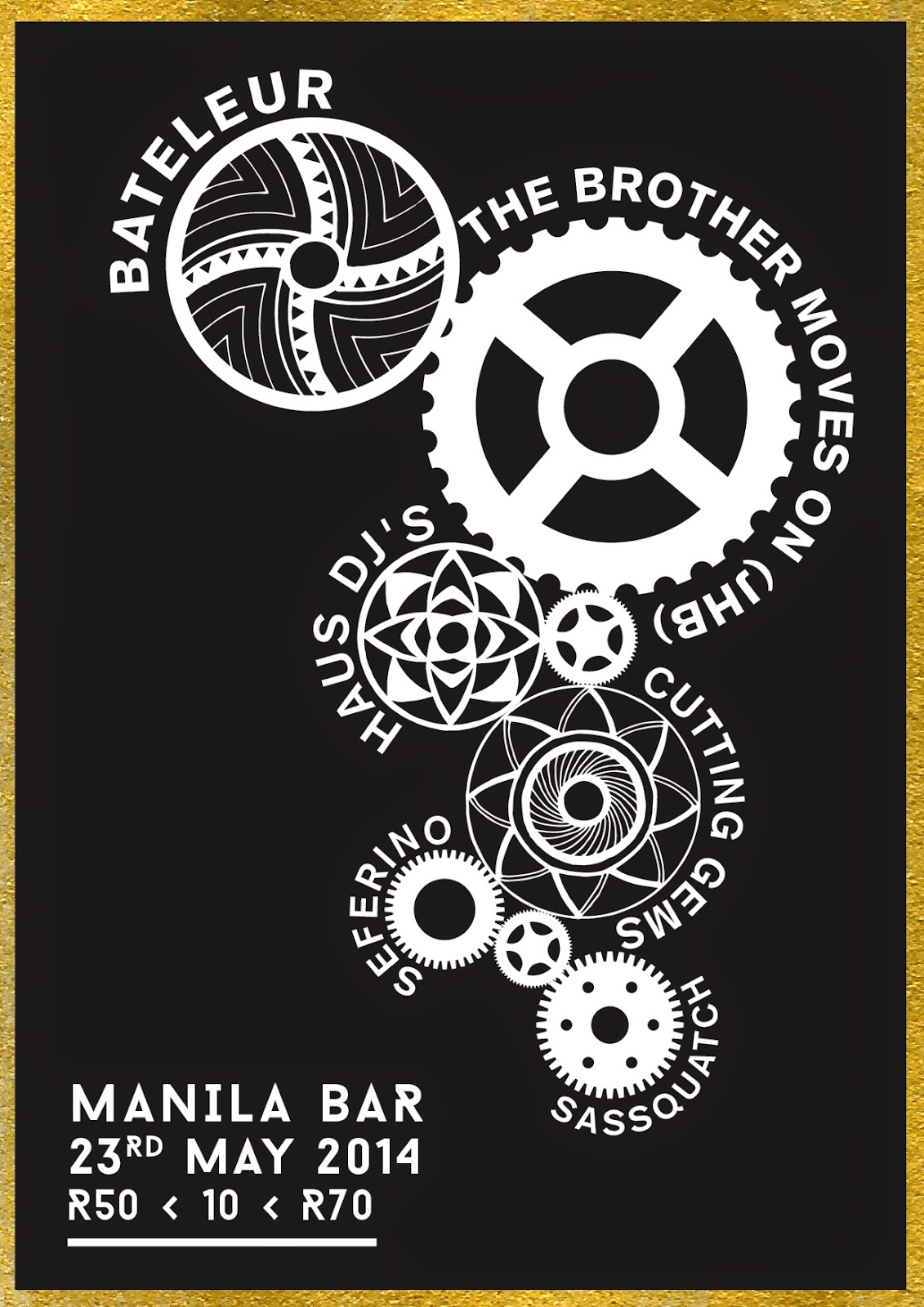 Email ThisBlogThis!Share to TwitterShare to FacebookShare to Pinterest
Labels: Bateleur, Cape Town, Cutting Gems, Sassquatch, Seferino, The Brother Moves On, You are invited

The Cape Town awesomeness-generating wonders known as Surfing Looser Space Cult have done it again! The gang's latest creation is a major double whammy; a stellar new Beach Party song and an ace-as-all-hell music video to accompany it.

The song is produced by The Cult's Andrew Esterhuizen (Gateway Drugs, ex-Beach Party). In my books, it's the best sounding thing he's done with Beach Party over their (soon to be) three album career. "I Want To" is the lead single off Album 3 "Ribs or Death" which SLSC will be dropping within the month. Based on how awesome this first song is, I think it's safe to say that I'm more than a little excited to hear what the gang have put together this time around.

In the video, it's great to see the band teaming up with Dylan Culhane again. The results of Dylan and Beach Party's previous adventures were plain awesome and things are no different this time around. The piece is edited by Beach Party's drummer and The Cult's resident moving-image-machine Xander van der Westhuizen. An incredibly beautiful little journey, this video too might be a highlight for Xander who's previous creations with SLSC have been solid gold time and time and time again.

A literal Beach Party featuring parallel-universe versions of a gang of Surfing Looser Space Cult members, the show is frequently stolen by Rocco (of The Dollfins family), but before I get too caught up in talking about puppies let me just present to you:
another wonderous gem of African rock and roll magic:
Beach Party's "I Want To":

This is pretty long overdue, but I guess it's better late than never right?

Following on their most excellent tour of South Africa, Australia's Dune Rats made their way North for a string of dates across The UK and Europe. I was asked to do a poster for the tour. I had tons of fun putting something together for this and here's how the it turned out. 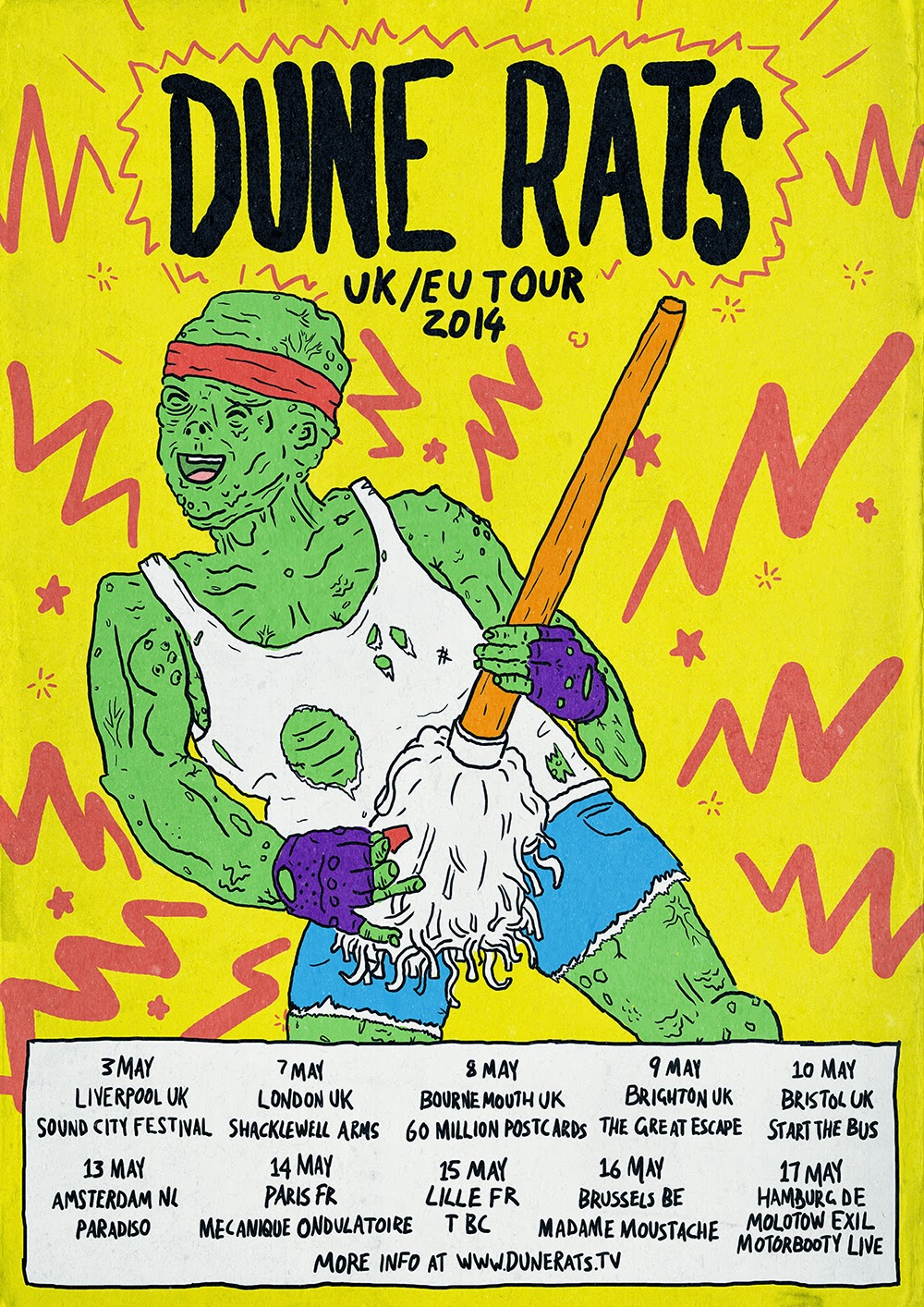 Only a few dates left on this, but if you're in one of the last 3 cities, I highly recommend you check these guys out!
Posted by Ben Rausch at 3:17 PM 7 comments:

As I'm slowly penning my recap of our recent adventures through The UK, here's a little prequel to set things up...

In anticipation of Seafox and I joining Johnny Foreigner to launch their 4th album, the band sent along some questions about what exactly I'd be doing. In classic Ben-style, I carried on for ages about shooting light of a keytar. Here's what I had to say:

-Can you describe via a pictorial diagram, what you'll be doing onstage with us? 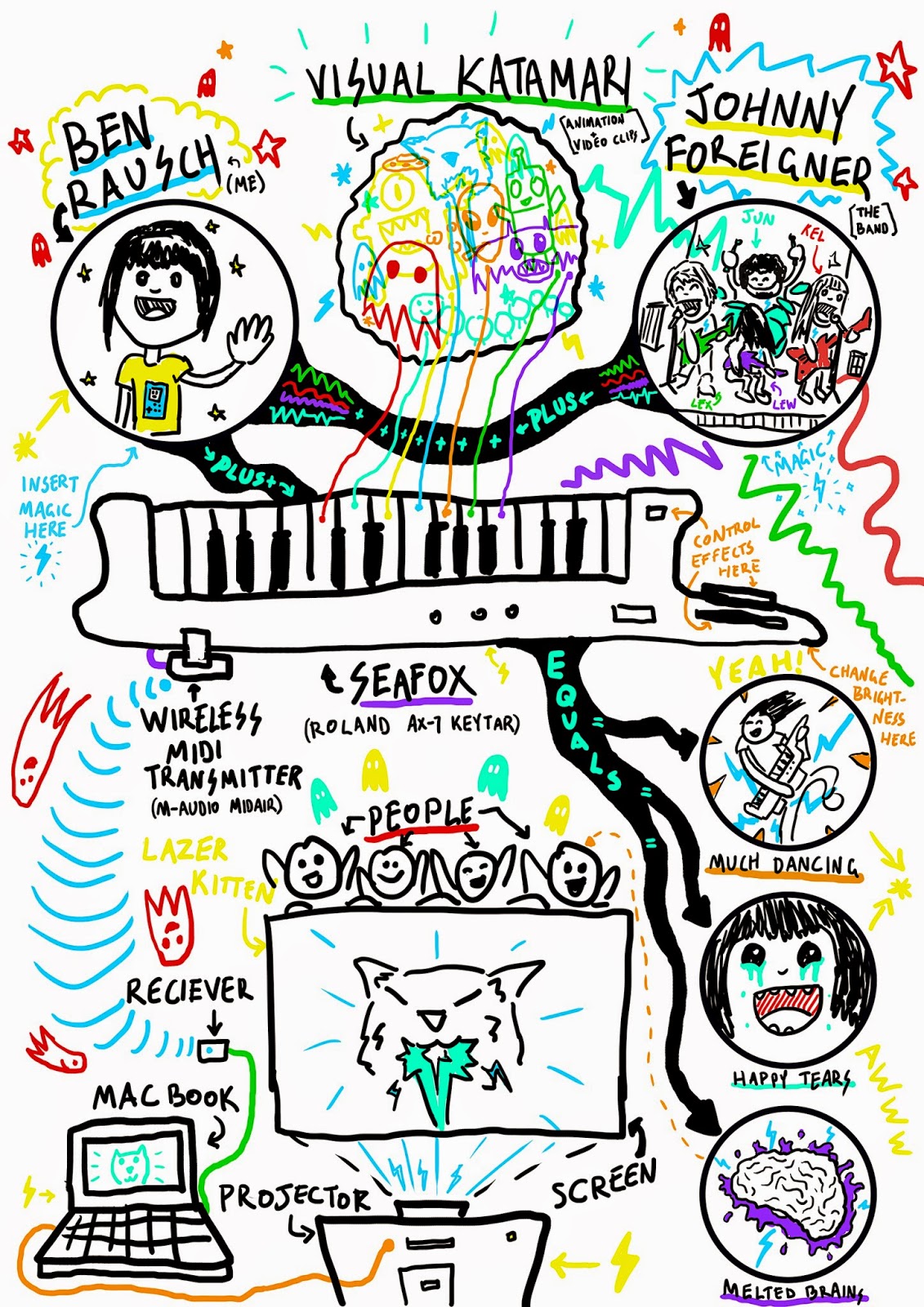 -So all you need is a trigger right? What made you use a keytar for that, instead of a sampler or a nokia n-gage, or an actual taxidermied fox with switches?

One fateful day in 2005, on a shopping trip for cowbells and shakers I saw a keytar on display. I rember thinking, if you combined it with key-mapped visuals it would be pretty righteous. And so started my long quest for a keytar. When I heard that the Roland AX-7 (then the last keytar still in production) had been discontinued, I had a renewed sense of urgency to complete said quest. It was a long and frustrating process that took two years, until I finally found her (my Seafox*) - I ordered her through this music store, and went to go pick her up one afternoon. When I got there, it turned out that she had been snatched up from under me by a sneaky store employee who happened to play for quite a famous south african rap metal band. It took a few months for him to realize that Seafox and I belonged together and sell her to me. So I feel like this is all fate somehow, I’m sure a taxidermied Fox might have had a cooler backstory, but that’s just not how it played out.

*A nickname that transpired after Kelly misheard me saying “synth-axe” as “seafox” and it just stuck.

-How did the idea for doing this crazy come about?

As well as enjoying it, I also spend a lot of time thinking about guitar music and what makes really great rock ‘n roll. When I was a kid I was really excited by the idea of people who had actually pioneered the hardware - electric guitars and amps, and then eventually distortion pedals and effects - it must have been such an exciting time! Being able to confront people with something so completely new and weird that they didn’t actually understand! Being able to amplify a tiny bit of electricity that existed in the humans behind the guitars and transfer into humans on the receiving end of the amps! I really lamented, in a way, not being around in that sort a time. Already by the time I was a teenager there was nothing necessarily shocking or dangerous about an electric guitar (or anything short of marilyn manson really).

When I was a bit older I realized that there were, in reality, great possibilities for using new technology for this rock ‘n roll purposes; many people (The Faint!) had already been doing this to great effect.

I don’t know what initially got the idea into my head, but once I started pondering using projection as a rock ‘n roll weapon, I got really (REALLY) excited by the possibilities. Although people had been VJ-ing digitally for years and with analogue hardware for even longer, I hadn’t seen anything of people performing visuals the way that people perform music. It just seemed really exciting; taking sound into me and turning it into light and doing it in a way try challenge what the point of a performance should be. 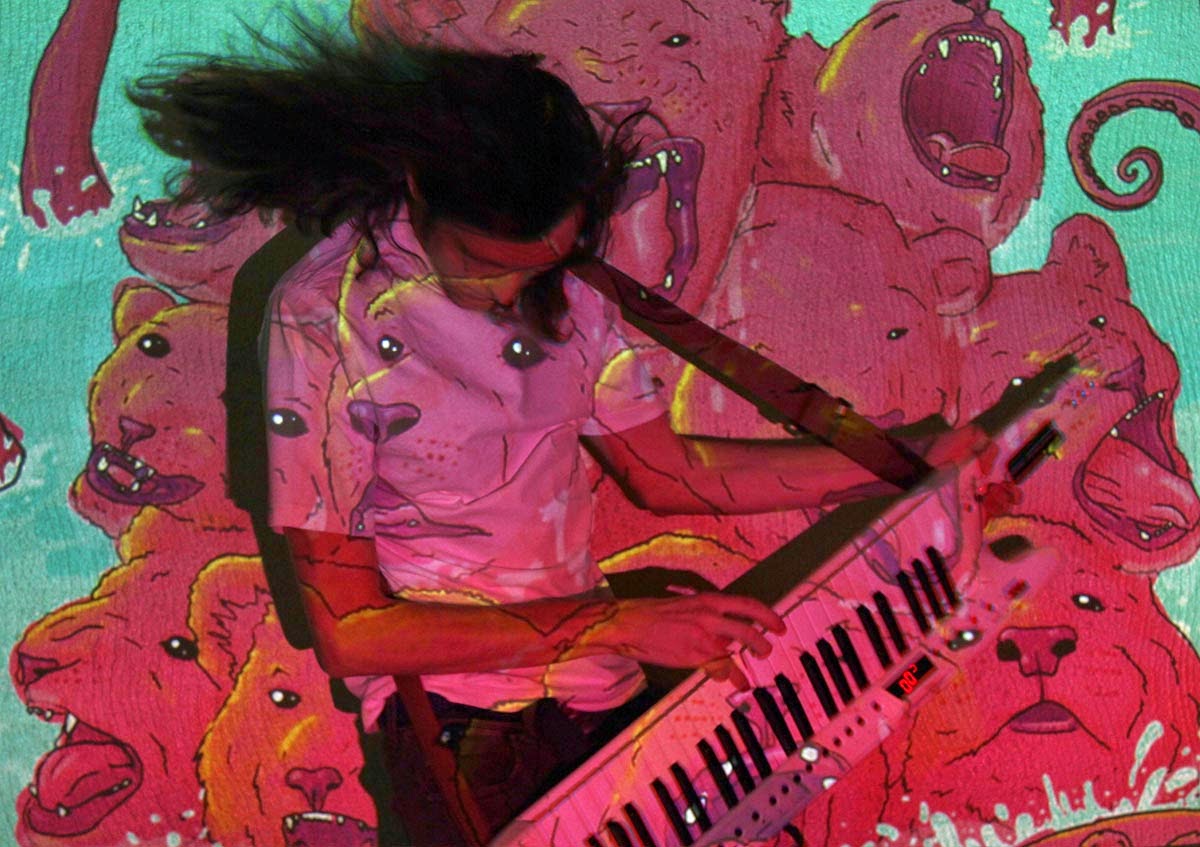 -What do you do when you’re not being a dancing vj keytar man?

I make images move with my best friend.

- What kind of imagary and animations can we expect? Is there still lazer cat vs bon jovi?

Every band that I am properly involved with, I’ve got a completely different visual language that I try to work with. Johnny Foreigner’s languesage has always been a tapestry. A collage. A giant katamari ball picking up pieces of me and Lewes, Lex’s helicam, Anja’s sketchbook, Jun’s photographs, Philadelphian basements, gifts from strangers, drawings from friends, slow-motion swiss landscapes, mobile phone clips, merch crafting sessions or whatever we run across.

It’s a language that’s a perfect fit for Johnny Foreigner. It’s really just another way the band does what it does all the time, but there’s something pretty magical about it in my eyes. Like, for example, at our last show in Chicago, our friend Henry brought along this ghost painting he’d made for us. I spliced it up right there and put it into the visuals for the evening. I got to give Henry his painting back in a different form that night. Now every following night I play with Johnny Foreigner, the audience will get that bit of Henry echoed back to them. This idea is something really beautiful to me.

We’re back to the guitar and amplifier thing. This time it’s a far more intricate, time-bending, multi-layered way, but it’s the same thing. Taking the moment where something was created, then putting own energy into animating it, or simply feeding it into my system, then beaming that back out at an audience in a whole new moment. Just hoping for a burst of energy from one body to the next.

So to answer your question, Bon Jovi and the laser kittens aren’t going anywhere, but there will be new fragments our katamari: YOU CAN DO BETTER! There’s obviously a bunch of new imagery to work into the mix, plus who knows what adventures await once the tour starts. I know that on the first dates we’ve got an exciting collaboration with Mel Reeve. One word: plushimation!

- You’ve been in our band so long now that when we play overseas and you’re not with us it feels wrong and empty. But this whole time you’ve only done like, 3 shows in the UK with us. Why do you hate England so bad?

-Who is your favourite member of johnny foreigner?

I know it’s cliched and everyone probably says this…but Johnny is my absolute fave!

-Isn’t it true that all the UK indie bands that do South African shows these days are just copying us?

I’m ending my interview, which I’m dictating to Anja, while I’m laying on the couch. Next on the agenda: we have our daily 16:20 joint sub-committee meeting to discuss our adoption of two kittens on my return from our tour. 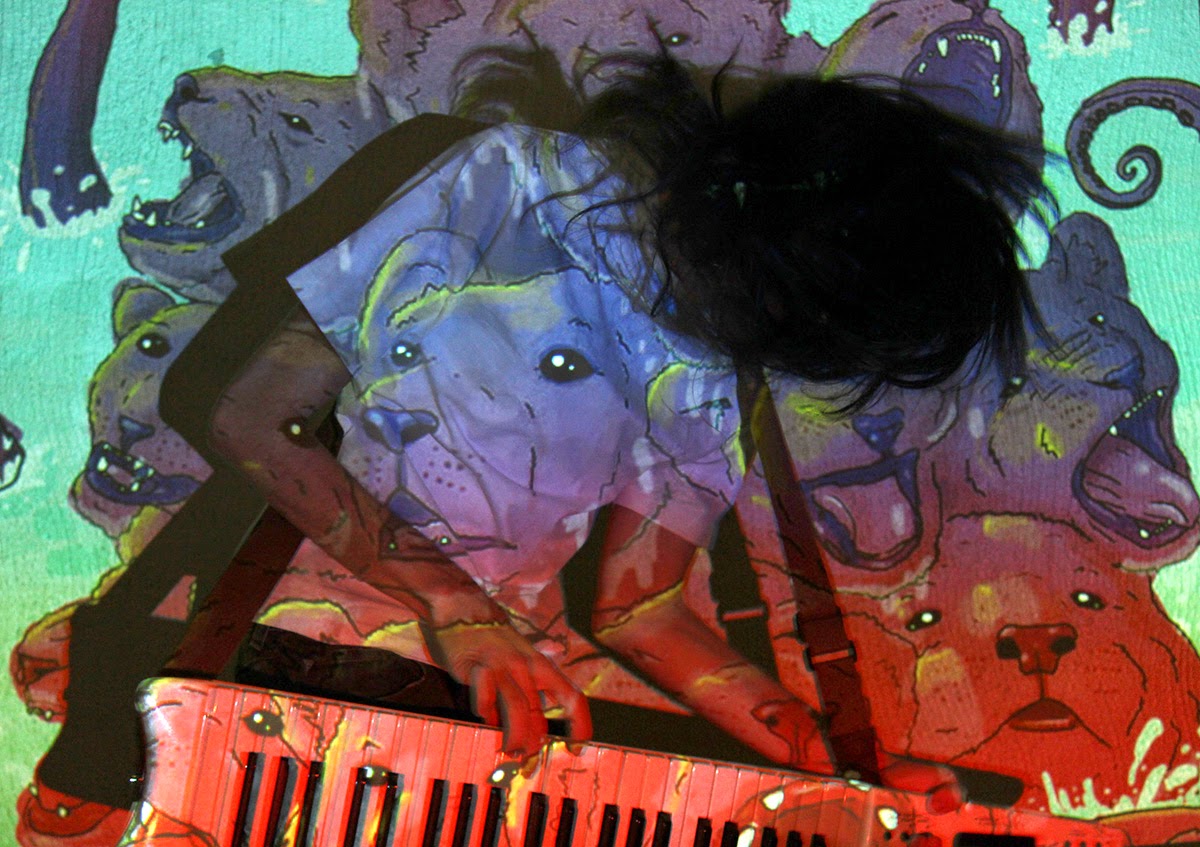